An unsafe property condition has the potential to cause serious injuries. You deserve compensation from the negligent party. We can help. Call our office today.

What is an unsafe property condition?

We’re often asked, what is an unsafe condition on a property in Wyoming? There are lots of things that can be an unsafe condition. The main thing is notice to the premises owner. For example, I had a case many years ago against a little diner. 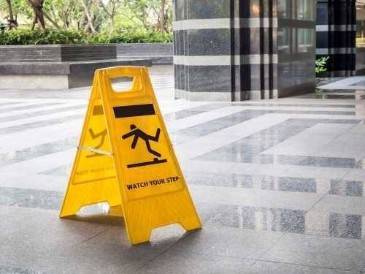 It was part of a national chain, actually. In this case, they had a door that would freeze with ice right inside the foyer so that there was a really slippery condition inside the foyer because of the way they designed the premises. Because the way the wind blew, it blew directly in the door, and it blew water under the door which would freeze in the foyer so that people would walk on through the door, think they were inside, and slip and fall. This had happened multiple times, and there were memos to the national chain from the local diner that we need to have somebody come in and fix this so that there’s a windbreak outside the door that prevents the water from blowing into the door and causing the slippery condition. There’s actually that information in the document.

Now, that’s a dangerous condition for two reasons. One, it’s a design defect. Whoever the person is that designed this designed it wrong, so it’s a design defect, which is one of the things that makes it a dangerous condition. The second thing is that they had notice of the fact. Regardless of the design, they had notice of the fact that they had a problem on the premises, and notice is very important. Somebody drops a grape in the grocery store, and the person behind them slips on it. The store doesn’t have time to have notice of that fact, and another customer dropped the grape. That’s probably not a dangerous condition unless you can prove that the grapes fall off all the time or something like it.

Were you seriously injured due to an unsafe property condition and have questions about premises liability claims?
Contact experienced Wyoming premises liability lawyer Frederick J. Harrison today for a free consultation and case evaluation.
We can help get your life back on track.